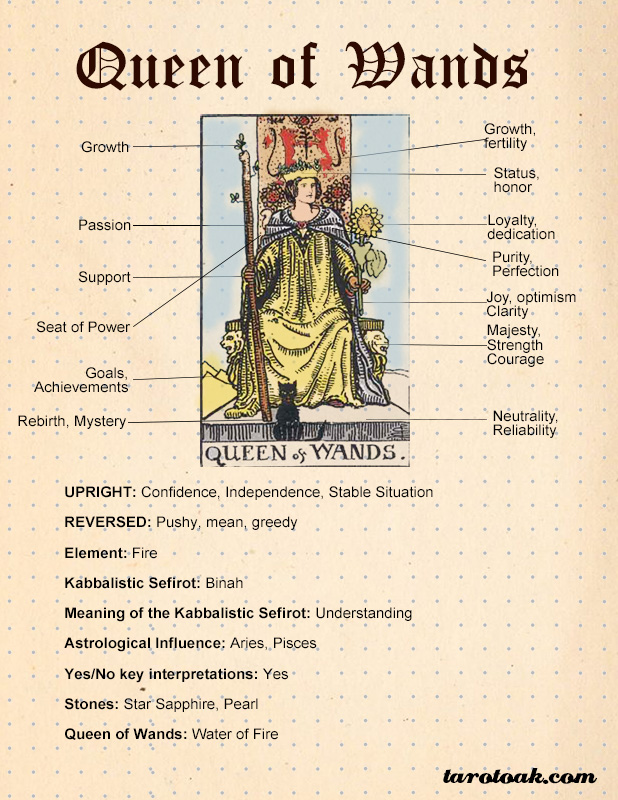 A Queen is one of the strongest and most influential members of the royal court. Even in the old times, queens were the rulers at many places. In the places where kings were the rulers, the queens were their right hands and most trusted allies. They kept and protected state secrets. A Queen was not only the wife of a king but also the mother of the next king of a kingdom. The attributes of a queen were fertility, management, mercy, creativity, and authority. A Queen’s personality is matched with water that is flowing, nurturing, life-giving, and having a steady and controlled flow and the cycle of emotions. The Queen of wands is Water of Fire.

The Imagery and Symbolism of the Queen of Wands Tarot Card

The Queen of Wands is sitting on a throne that is a seat of power. Two lions are engraved in the arms of the throne and the other two are made at the back of the throne. That can be a tapestry that is hanging behind her. The lions are fiery and majestic animals and depict strength and courage. The queen is wearing a yellow robe that shows joy, optimism, and clarity and a white cape on her back is a symbol of purity and perfection. She is wearing a crown on her head that shows her power and authority and green leaves emerging from the crown symbolize growth and fertility.  She is holding a wand in one hand that shows her fiery energies and passion and a sunflower on the other hand. Sunflower is a symbol of loyalty and dedication. Her throne is set on a grey platform; the grey color symbolizes neutrality and impartiality. There are three mounds in her background that show her past achievements. A black cat sitting in her feet is a symbol of mystery, secrets, and rebirth. Overall her image reflects strength, generosity, and determination.

Astrology and the Queen of Wands

Queen of Wands and Kabbalah

In Kabbalah, all four queens and all the threes belong to the Sefirot of Binah (Understanding). This sefirah is the energy from which all life emerges. Binah is the giver of life and the Queen of Wands belongs to Binah in Atziluth, which is the highest of the four worlds.

Queen of Wands as a Person

Some tarot readers say that the Queen of Wands depicts a female in a querent’s life or if the client is a female then the Queen of Wands represents her but the Queen can also represent a male with the qualities of the Queen of Wands. So you may say that the Queen of Wands can represent any mature adult. In my readings, I have found this card appearing for highly motivated entrepreneurs who have set up and running their businesses. Their businesses are sustainable and working well but they are not large empires. This card represents such people who are confident, dynamic, motivated, loyal, and dedicated and also keep a sensitive side. It shows the people who are charming and attractive but have control of their intimate desires. This card may also represent such mothers who are also successful entrepreneurs.

If this card appears in a general reading, it can indicate a person or a situation. I have shared the type of person this card depicts in the above paragraph. In aa general reading this card shows a positive situation where you are in control and confident. You have achieved some of your goals and now you have taken charge. It shows that dedication, loyalty, control, passion, and sensitivity will help maintain and sustain this situation.

Queen of Wands Tarot Card in a Love Reading

In a love reading, this card represents and stable, sustainable loyal, and smooth relationship. It might also represent that one of the people in the relationship carries the qualities of the queen of wands. This is a positive card of passion and loyalty in a love reading.

Queen of Wands Tarot Card in a Career Reading

In a Career reading, this card shows that you have complete control of the situation at your workplace. You have achieved your goals and have established an authority. This card also shows success in business ventures and great managerial qualities. This card might also indicate a person with the qualities of the queen of wands at your workplace.

Queen of Wands Tarot Card in a Health Reading

Queens are fertile and nurturing moms so it is a good omen if you are trying to conceive. This is a card of health, vigor, and vitality. You’ll get complete control of the situation, even if you are facing some health-related problems right now.

When the queen of Wands is in a reversed position, the cat comes at the top and she will be not happy in an upside-down position too and be very pushy. The queen will lose the positive flow of energies and resultantly her fiery energies will make her mean and arrogant. Her wand will be reversed so growth will also stop. Her crown of authority may also fall. This is not a positive card in a reversed position and it can represent someone who is mean, bossy, pushy, deceptive, and manipulative. It might also represent a situation that is not in your favor. Where you have lost the position of authority and lost control.

In a career reading this card might show a failed business venture.

In a love reading, this card might indicate that one person is being disloyal and mean.

This is not a good card to get in a health reading. It shows a lack of vitality and problems in conceiving a baby.