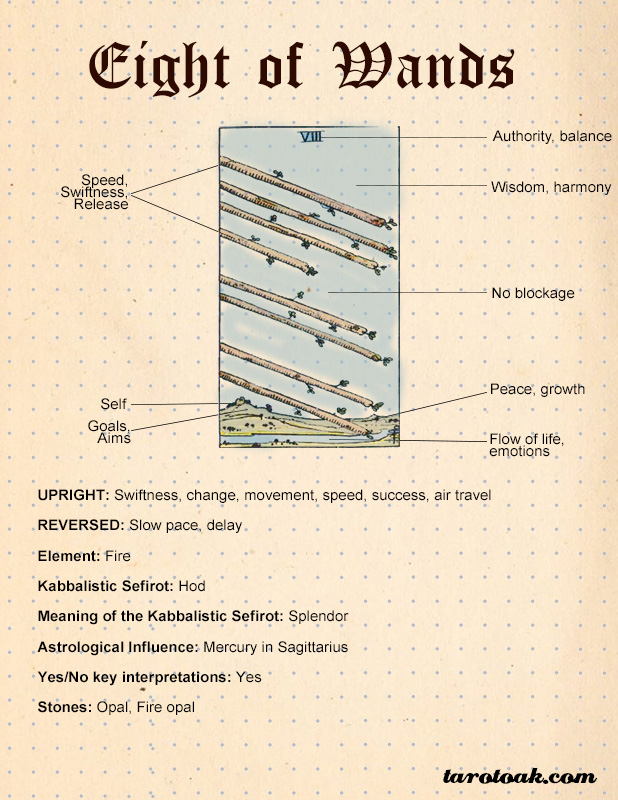 Eight of Wands is the card number 8 in the fiery suit of wands. Eight is the number of authority and balance and suit of wands belongs to Minor Arcana in Tarot and it is related to passion, energy, vigor, and dynamism.

The Imagery of the Eight of Wands Tarot Card

The imagery of this card is clean, clear, and simple. Eight wands are moving swiftly at an angle. All the wands are at various positions but they are following the same direction. The problems that arise at 7 of wands got clear at 8 of wands and now there is a release from obstacles and difficulties. The staves are moving rapidly and they indicate speed and swiftness. The clear background of the card shows that there is no blockage or obstruction. There is a vast landscape with a river flowing by. The greenery of the landscape indicates peace and growth and the river shows the flow of life and emotions. There is a hill in the background that represents our long term goals and aims and a house at the hilltop represents the self. This is overall a positive card that is evident from its imagery. Still, we cannot say for sure that if the wands will reach the mark upon reaching the ground or miss it.

Astrology and the Eight of Wands

The eight of wands astrologically corresponds to the first decan of Sagittarius that is Mercury in Sagittarius and it falls between November 23rd and December 2nd. Mercury is the fastest moving planet and it is related to communication, mind, intellect, reason, language, reasoning, linear thinking, travel, and trade. However, Mercury is at its detriment in Sagittarius.  Sagittarius also brings qualities of optimism, love for freedom, intellect, and philosophy in an individual. Eight of wands was called ‘The Lord of Swiftness’ by the golden dawn designers.

Eight of Wands Tarot Card as a Person

The Eight of Wands as a tarot card represent someone who is enthusiastic, energetic, spontaneous, and passionate. These people can take quick decisions and act towards their goals at a fast pace. These people have many passionate ideas and can work on many tasks at a time and can manage those well. These people can bring change in the environment through their energies and these can be excellent communicators. Eight of wands shows motivated, driven, and highly passionate individuals.

If this card appears in a general reading, it shows that things will change in your life quickly, swiftly, and rapidly. There will energy, activity, and excitement. This card indicates a strong possibility of air travel. It also shows quick communication like a chat on the web or emails or any other form of electronic communication. In a general reading, this card shows that the environment around will be favorable for you to move quickly towards your targets and goals. You can roll out various ideas or projects in the direction where you want to reach. You can be spontaneous and you’ll have the energy and enthusiasm. However, don’t be hasty and make decisions wisely. Also, you can expect some news or a surprise today.

Eight of Wands Tarot Card (Upright) in a Daily reading

Eight of Wands Tarot Card (Upright) in a Love Reading

In a love reading, this card might indicate that things will move at a fast pace and rapidly in your relationship. If you are single, someone might enter your life unexpectedly. Expect some change and excitement in your love life. There is a possibility of traveling together as well.

Eight of Wands Tarot Card (Upright) in a Career Reading

If this card appears in a work or career reading, it means that there will be rapid progress in the projects that you have been working on. There are chances of work-related travel. This card represents a favorable work environment without any obstacles or hindrances.

Eight of Wands Tarot Card in a Health Reading

In a health reading, this card might represent a rapid recovery or on a bad note a rapid illness and some kind of emergency.

In a love reading, this card in a reversed position it might show that the effort that you have put in a positive direction is not being fruitful. You have to work really hard to make the relationship work and there is still a lack of progress. The emotions are probably taking control of the situation.

In a career reading, the reversed eight of wands might indicate that some work-related traveling is canceled or delayed. It might also represent that you need to put more effort into your goals and have to apply more force to keep the work in momentum.

In a health reading, this card in a reversed position might indicate a slow recovery from the illness.