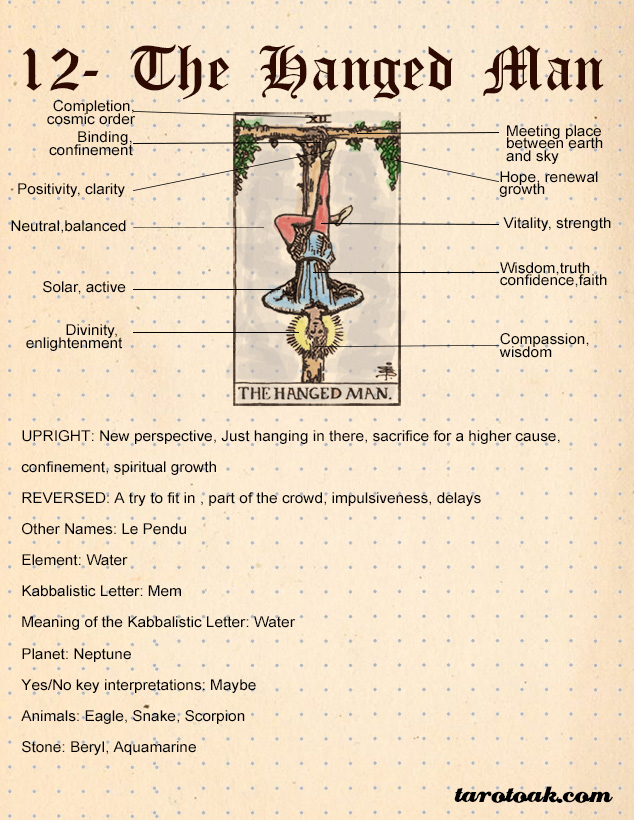 UPRIGHT: New perspective, just hanging in there, sacrifice for a higher cause, confinement, spiritual growth

REVERSED: A try to fit in, part of the crowd, impulsiveness, delays

Name of the Card: The Hanged Man

The Imagery and Symbolism of the Hanged Man Tarot Card

A man is hanging upside down by one ankle on a Tau cross-shaped tree. Tau cross has many meanings; it is the symbol of the meeting place between the earth and the sky. That meaning brings deeper spiritual attributes to this card. Tau is the final letter of the Hebrew alphabet. It is numbered 300 in the Greek and 400 in the Hebrew numerical alphabet. It is also considered a phallic symbol.

The person is in a reversed position that shows a complete reversal of perspective. Even though he is in such a difficult position, his facial expressions are calm and serene. A rope is tied to the left ankle of the hanged man and to the top of the tree. The rope is a depiction of confinement and control. The person is wearing red pants which show passion, energy, vitality, and strength. His shirt is blue, which is a color of wisdom, truth, confidence, and faith. Both blue and red bring each other in neutrality and harmony. This card has a grey background; grey is also a neutral color. The hanged man has golden hairs that show his compassion and wisdom and there is a yellow halo behind his head which shows divinity and enlightenment, a deeper connection with the higher self. He has tied his arms behind his back in the form of a triangle. The right side up triangle is considered masculine, solar, and active. This triangle also symbolizes balance.

The Hanged Man and Kabbalah

The path of the Hanged man on the Tree of life is called ‘Mem’ which means water. This path connects Geburah (Severity) to Hod (Splendor) on the Pillar of Severity. It is the connecting channel between the personality and the higher self. This is the path of water, water is linked with consciousness and emotions.

The Hanged Man Tarot Card as a Person

The Hanged Man card denotes someone who has a different perspective about the things. These people do not fit in because they have a different approach and unconventional ideas. These people are tied to worldly matters and dealings, they feel stuck and restricted but they have developed their peace with their boundaries. These people are spiritually enlightened and lost in themselves. They are not scared to make any sacrifice where a higher cause is involved.

If this card appears in a General reading it may mean that you need to take a look at the situation with a different perspective. It might show that you are confined and restricted due to some reason but you should just hang in there and analyze the situation. This card tells you to stay neutral, calm, and keep your inner balance. You have passion and energies to take action but you should just wait for the right time. Meanwhile, just connect with your inner wisdom, reflect, and look at things with a new angle.

The Hanged Man Card in a Daily reading

If this card appears in a daily reading, it means that you need to try a new approach to handle things today. It means that you should accept the situation that has bound you and utilize this time to complete the tasks that you can manage with this restriction. This is also a good day to introspect and change the strategy.

The Hanged Man Tarot Card in a Love Reading

If this card appears in a Love reading, it might mean that you are feeling bound and constrained in your relationship. You feel that there are many obligations that you have to fulfill unwantedly. You have made your peace with it but this is actually not what you want. This card suggests that you should thoroughly analyze the situation before making a change. This card may also indicate some unconventional relationships and lifestyles.

The Hanged Man Tarot Card in a Career Reading

If you get this card in a Career reading, it might mean that you do not truly belong at your workplace. Your approach, ideas, and ideals are even though superior and well thought out, but they are completely different from the approach that is taken by the people around you.

This card also suggests that you should look at any problem or challenge that you are facing at your workplace, from a different angle and perspective.

The Hanged Man Tarot Card in a Health Reading

In a health Tarot reading, the hanged man card suggests that you should look for different healing options to cure your illness. It might suggest taking the alternative route for healing. This card also tells you to exercise and to get more connected to nature.

When the hanged man card will be in a reversed position, he will stand on his one foot. It will still be tied to the tree but now he is in a better position to free him but still, it will take some time so this card in reversed position might suggest delays. Now he will become a part of the crowd.

Now his yellow shoes and red pants can make him follow his passion but he should also use his wisdom. He shouldn’t make impulsive decisions and should carefully analyze his ideas, why is he doing what he is doing? Is he just trying to be a part of the crowd and trying to fit in or his motives have some higher cause?

In a love tarot reading, the reversed Hanged man is telling you to not completely follow your passion and drive but also to use your wisdom.

In a career reading, it suggests that the period of introspection is over, now you can learn from the past and make new decisions. You should take your time and act wisely.

In a health reading the reversed hanged man that it is the time to get back on your own two feet and be a part of your everyday life. You can fix your life yourself. Just stay wise and act calmly.