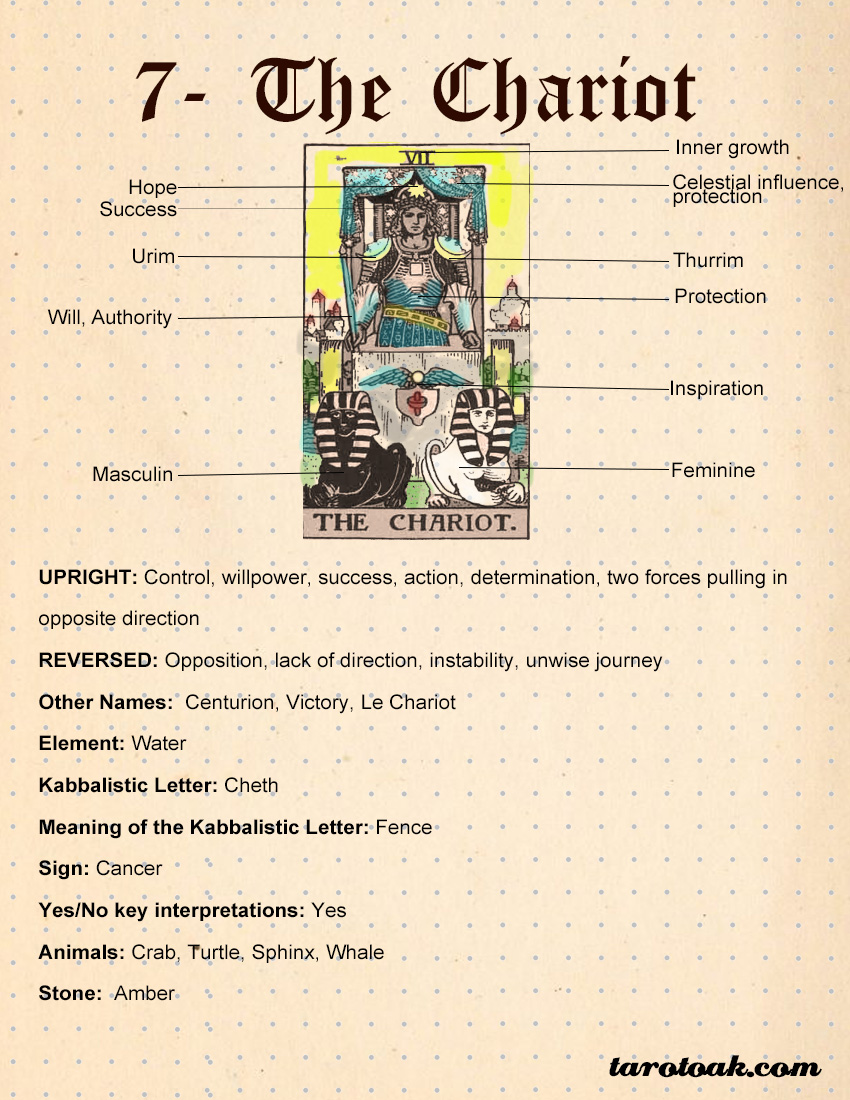 The Chariot is the trump no 7 in any traditional tarot deck. 7 is the number of spiritual awakening, inner growth, introspection, wisdom, and intuitiveness.

The Imagery and Symbolism of the Chariot Tarot Card

A young man, probably a prince is standing on his chariot. He is holding a wand in his hands that shows his will and authority but the wand is blue in color so it also represents his emotional side. He is wearing an armor that shows protection. His chariot is driven by two sphinxes, one is black and the other is white. These sphinxes represent polarity or opposing forces, these may represent the masculine and feminine aspects of one’s nature or the influence of good and evil. The prince is wearing a crown with laurel wreath and eight-pointed star, this represents hope and victory. The eight-pointed star has significance in many religions. There is a canopy above his head with the stars made on it, this represents celestial influence. There is a winged sun made on his chariot that shows his inspirations. A square on his chest indicates that he is stable and grounded. There are buildings in the background, probably his palace and also a river flowing behind him, these show that he is so focused on his goals and determined to achieve the victory that he is not hesitant to leave luxury or comforts of home and not scared to cross any obstacle.

Astrology and the Chariot

The Chariot card corresponds to the zodiac sign of Cancer. Cancer is ruled by the moon that is the planet of intuition, reflection, and inspiration. Cancers are extremely self-protective. This trait of the sign is visible in the armor and canopy of the chariot rider. Cancers are gentle in nature; they are compassionate, mystical and genuine. Cancers are emotionally intelligent, just like our charioteer they know how to use their emotions as strength and not as a weakness. Just like our charioteer perseverance is a very strong trait of their personality.

The Chariot and Kabbalah

On the tree of life, the path of the Chariot runs between Binah (Understanding) and Geburah (Strength or Severity). The name of this path is Cheth that means Fence. The movement of the Chariot or the path of Chariot conceals the mystery of great significance. They have shown it in the Golden dawn card in a way that symbolizes the descent of the Holy Spirit into manifest creation.

The Chariot as a Person

The Chariot represents a person who is strong-willed, enthusiastic, brave and yet emotional. It represents a person who has the sensitivity to feel things but who knows how to use the emotions as a powerful tool and not something to get distracted by. If the Chariot card turns into a person, he or she will be someone who doesn’t follow people’s advice blindly but clearly know their own path and also know how to follow it. These people know to make their way to success. They can cross any hurdle and any obstacle to find victory.

The Chariot Card in General Reading

The Chariot is the card of very strong willpower and control. It shows the focus on a specific goal despite distractions. Keep faith that even though you’ll have to leave many things behind, the new change in life, your new endeavor, or the new journey will be positive for you. If it appears in a general reading, it may represent a situation where two opposing forces are in action but you have to work with control and use your own will and wisdom. It can represent the influence of two people with two different ideas. You should have faith and decide for yourself instead of listening to others and getting influenced by others.

It is a card of traveling and also of getting a new vehicle.

The Chariot Tarot Card in a Daily reading

If this card appears in a daily reading, then it is a day to maintain focus, confidence, and control. You should be self-disciplined to get over any challenges that come your way today. Believe in yourself and keep faith that you have the needed drive and strength to be successful today.

The Chariot Tarot Card in a Love Reading

If the Upright Chariot Card appears in a love reading, it means that you need to focus on your love life. You need to protect yourself but at the same time be sensitive about your own emotions too. You should not listen to any other person, any third party and not get influenced by others. Just keep the focus to yourself and to your partners to work things out. It is a positive card of victory and after some obstacles, the victory will be yours.

The Chariot Tarot Card in a Career Reading

This is a very positive card to get in a career-related reading. It shows that you are focused on your goals; you are determined and not distracted by the positive or negative influences. It shows that you will overcome any work-related trouble and things will work well for you. You should just firmly hold your position and keep working with focus.

The Chariot Tarot Card in a Health Reading

This card shows that you are keeping the needed focus on resolving health issues. You have handled your health issues with much-needed care and you have already crossed a rough patch related to health problems. You are on the road to recovery and you will beat the health issues with your willpower and due diligence.

When the Chariot card is reversed, the sphinxes get on the top of the card. One sphinx is going to the right and other to the left. This card in a reversed position will indicate a lack of direction, getting easily influenced by others and instability.

If the Chariot card appears in a reading in a reversed position, the querent should take some time to introspect and decide the path that they need to follow in order to reach their goals.

The reversed Chariot card in a health reading may indicate a lack of stamina and lack of focus. It may represent that you are not taking adequate measures to cure your health issues but you are confused between the options. It is time to focus on your health issues with clarity and to seek professional guidance.

In a love reading the reversed chariot card shows that you are confused about your relationship or love life. You have lost focus and listening to some meddler. You need to take control of your love life and need to put the focus on making it work.