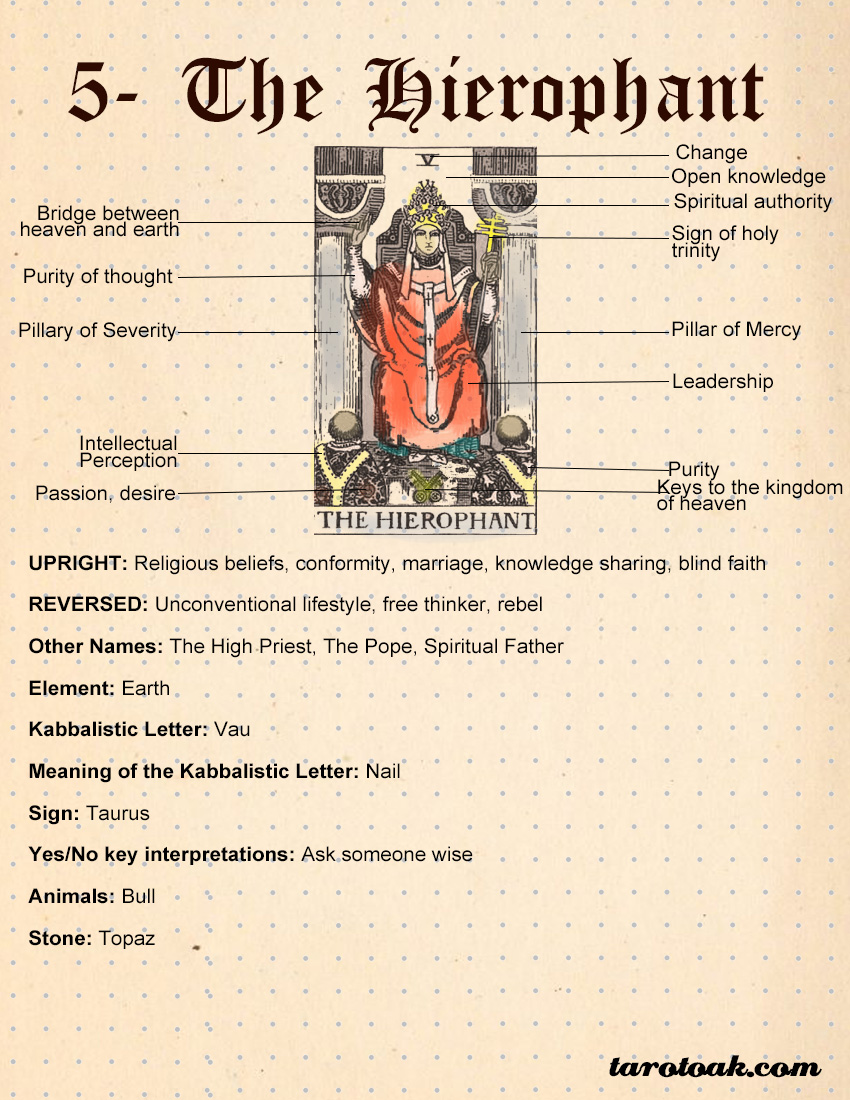 The Hierophant is card number 5 in the major arcana. In most traditional decks, it has the image of the pope or a catholic priest made on it. Generally speaking, it depicts a spiritual guide or mentor that can be from any religious institution. It may also represent a religious or traditional institution itself.

The Imagery and Symbolism of the Hierophant Tarot Card

The Hierophant is seated on a stone throne between two grey pillars. These pillars are two opposing forces. These can be pillars of severity and mercy from the tree of life and can also be pillars of law and liberty. Some consider these pillars of obedience and disobedience.  There is an empty space between the pillars that shows that the knowledge shared by the Hierophant is open for all. Two fingers of the right hand of the Hierophant are pointing towards the heavens and two are pointing towards the earth. These symbolize that he is a bridge between the heavens and the earth. He is wearing a three-tiered diadem on his head that symbolizes his spiritual authority. Two worshipers are sitting in front of him. This card also depicts the relationship between the teacher and the pupils. The roses and lilies on the shirts of the worshipers symbolize purity and passion.

Astrology and the Hierophant

Taurus rules the path of the Hierophant. Taurus is a fixed earth and it is represented by the bull.

Taurus is grounded, realistic, devoted, responsible, stable and practical due to the influence of the Earth element. The influence of Taurus makes a person logical, practical, devoted, responsible, stable, generous, trustworthy, determined, understanding, kind, enduring, persistent, solid, determined, organized and patient. Both the Hierophant and the Taurus bring structure and propriety.

The Hierophant Tarot Card and Kabbalah

The path of The Hierophant Vau, connects Chokmah (Wisdom) to Chesed (Mercy) and it is the uppermost path on the pillar of Mercy. The path of Vau is a masculine one. The meaning of the Kabbalistic letter Vau is ‘The Nail’. Like a nail binds together and unifies, the role of the Hierophant is to bring together the Great Universe and the Manifestation.  The originators of this card have used the image of their Pope to represent the energy of the path of Vau, but Kabbalistically it can be a person who knows the mysteries of the universe and shares the light with others in this world.

The Hierophant Tarot Card as a Person

In my readings, the hierophant always appears for people who are very traditional and conform to societal and religious values. They are so firm in their beliefs that nothing can change it for them. They are not shy of sharing and sometimes imposing their own philosophy on others. Ideally, the Hierophant personality is such that provides support and help to others. The hierophant should be someone who is aware of the real meanings and mysteries of life and know the true purpose of life. However, in my experience, the Hierophant people are mostly conservative and not ready to move a little bit from the traditional path and norms.

The Hierophant Tarot Card in a Daily reading

The Hierophant Tarot Card Meaning in a Love Reading

The Hierophant Tarot Card in a Career Reading

The Hierophant is a card of convention and hierarchy. If this card appears in a career reading then it means that this is the time to listen to your boss and follow just the traditional ways at your workplace. Do not challenge the authority and be part of the crowd or the team. It is also a card of mentoring or being mentored by someone. Just play safe in financial and career-related matters and do not try out of the box ideas.

The Hierophant Tarot Card in a Health Reading

If you get this card in a health reading then it is time to follow the traditional route to find the cure. You should see a specialist doctor. Just follow your prescription and listen to your doctor’s advice.

When this card gets reversed, the worshipers take a higher position and the hierophant doesn’t suddenly remain the center of the attention. The worshipers can now challenge the authority of the Hierophant. His crown of authority will also fall down. The meaning of this card in a reversed position gets totally opposite to its meaning in an upright position. Now it is time to challenge the status quo and think outside the box. It is time to question the traditions and not to have blind faith.

In a love reading, it tells you to be open-minded and have some non-traditional and unconventional relationship with someone.

In a career reading, it tells you to create your own unique identity and question the person in authority. If you think that the boundaries at the workplace are too suffocating, stand for your rights. Seek help from the cards accompanying this card too.

In a health reading, it tells you to switch to the alternate methods of healing.