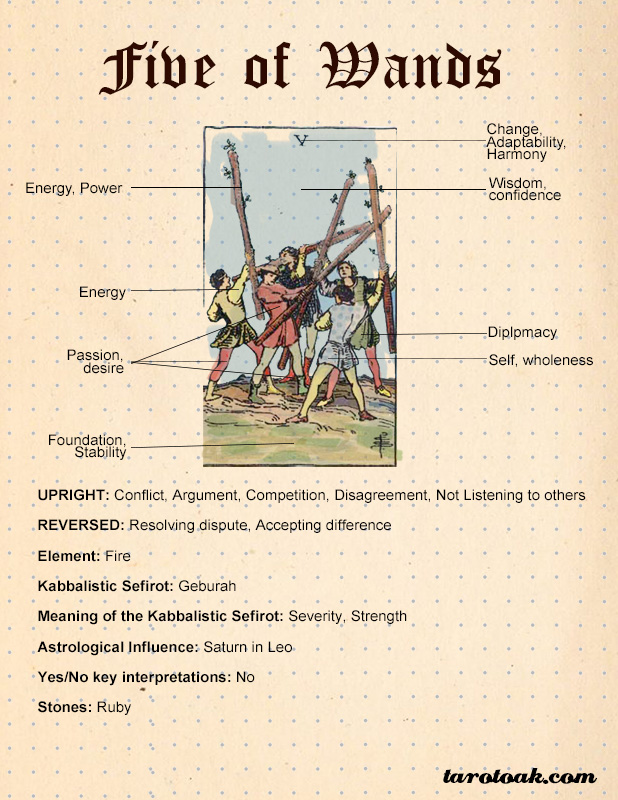 UPRIGHT: Conflict, Argument, Competition, Disagreement, Not Listening to others

Five of wands is card number 5 in the fiery and passionate suit of wands in minor Arcana. The energy that gained balance at number 4 is now disrupted again at number 5. Number 5 shows some sort of chaos and imbalance in all suits of tarot. Five is the number of adaptability and harmony in numerology but it is also a number of changes.

The Imagery of the Five of Wands Tarot Card

When you look at this card, it seems like a scene from a fight with 5 young men holding huge staves in their hands, probably hitting each other but when you look again, it seems not that intense. It looks like kind of a playful fight or practice or challenge than fierce and intense combat. There is a bright blue sky in the background that shows confidence. The ground at the feet of the men symbolizes a firm foundation (for their beliefs). Each man is wearing a tunic, legging, and shoes of different colors. The red show’s energy and passion, the olive green symbolizes diplomacy; the blue is the color of wisdom, pale yellow shows energy, the circles on one tunic represent self and wholeness. It seems like all the people firmly hold their opinion and all of them have a very different opinion that is showed by the colors of their dresses. They are not very hostile but they are also not listening to the opinion of the other person. In this card, the energy is scattered and no one is focusing on the same point. This card represents a conflict of opinion among a group of people and also the conflict one holds inside. Golden dawn designers called this card ‘The Lord of Strife’.

Astrology and the Five of Wands

In astrology, the Five of Wands corresponds to the first decan of Leo. The first decan of Leo is ruled by the planet of limitations, discipline, structure, and boundaries called Saturn. The span of this decan is from July 21st till August 1st. When Saturn enters Leo, an urge to control the environment emerges but Saturn in Leo brings both challenges and opportunities.

In Kabbalah, all 4 fives belong to the Sefirot of Geburah that means severity or strength. Five of wands is Geburah in Atziluth, the world of pure spirit. This sefirah is ruled by Mars, the planet of war.

Five of Wands as a Person

Five of Wands represent someone who gets triggered easily and who gets into disagreement without sharing the views of the other person. On a positive side, they are not scared of getting into competitions and challenges and proving themselves. They think that they hold a firm ground and they can exert their opinions and views on others.

In a general reading, this card represents conflict, argument, competition, disagreement, or not listening to others. It shows that the querent is having disputes with the people around him or her and they are unable to find a solution. Different people in the life of the querent hold different opinions and they are not ready to accept or hear any other viewpoint, instead, they are adamant of imposing their own viewpoint on others. This card indicates a struggle. This card may also represent conflict and chaos inside the querent. There are so many conflicting emotions and the querent is unable to decide what to choose or which thought is right.  It may also represent that the querent has to put more effort into their job at the workplace or in their social lives to make their way.

Five of Wands Tarot Card in a Daily reading

When the Five of Wands Tarot Card appears in a daily reading, get ready to face some chaos, disagreement, or dispute. The day is not going to be easy. Probably today you will need to stand up for yourself to make your way or listen to others to avoid the conflict.

Five of Wands Tarot Card in a Love Reading

When this card appears in a love reading, expect some conflicts with your partners. You will not be listening to each other and won’t be accepting each other’s ideas. There will be a disruption and dispute with the people around you as well that can affect the love life. Probably you need to work with the change instead of standing up against it. If you are single, this card might indicate that you have to go through some competition to reach the person whom you like or probably someone else is fighting for you.

Five of Wands Tarot Card in a Career Reading

In a career reading, this card shows tension, struggle, and clashes at the workplace. There will be a competition among co-workers but without any focus. You might have to stand up for yourself to protect your turf but also listening to others can be a better option in order to avoid conflict.

Five of Wands Tarot Card in a Health Reading

In a Love reading, the five of wands tarot card shows compromise, cooperation, and negotiation after some disagreement or fight. Both of you are ready to listen to each other and ready to accept the ideas of each other through discussion instead of going through heated arguments.

In a career reading, this card will show that the tension at the workplace will be released and competition, struggle, and rivalry will be over. Everyone will be peaceful and ready for discussion.

However, this cannot be a very positive card in health reading. It might indicate that you’ve given up after fighting for the illness. Don’t give up and lose hope, instead, seek more medical advice and look for other solutions.