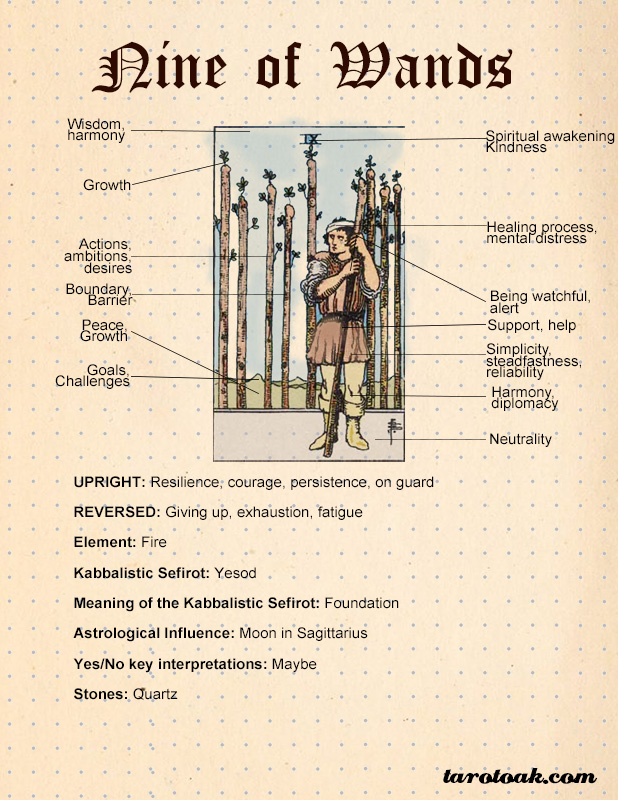 The nine of wands is the 9th card in the suit of wands in Minor Arcana. Nine is the number of Spiritual awakening and kindness and ‘The Hermit’ is card number nine in major Arcana. If 10 is the completion of a cycle then nine shows that you are very close to the end of this cycle. You have gained experience and wisdom and have to go through just a few ordeals and trials to reach the completion.

The Imagery of the Nine of Wands Tarot Card

A weary, tired, and exhausted man is standing with a staff in his hand. His exhaustion shows that he has been through some tough tasks. He has a bandage on his head that indicates that he might have some wound underneath which is healing. This bandage also represents mental distress. He is holding a staff in a watchful and alert way, as he is ready to attack anyone who appears at once. He is on guard. His staff also represents the help that he has available with him. There is an uneven but green land in his background. The big and small hills show the challenges that he has been through and the goals that he has achieved. There is a neat boundary of eight wands in his background as well. The wands represent action, ambition, and desires and they are sprouting at the top that symbolizes growth. The barrier that is created with these wands might indicate that this barrier is to stop someone from emerging from the back or to stop some bad memory to emerge from the past? The brown color of the tunic of the man is a symbol of simplicity, steadfastness, and reliability and the olive green color of his pants and shoes depicts diplomacy and harmony. Overall the man looks resilient, courageous, and ready to face any challenge and trouble that might come his way. He is standing on a grey road that shows the neutrality. He is neutral for now and will decide his reaction when something or someone will appear.

Astrology and the Nine of Wands

In astrology, the nine of Wands corresponds to the second decan of Sagittarius which falls between 3rd December and 12th December. In this decan, the moon enters Sagittarius. Moon is the planet (in astrology) of reflection, cycles, feminine qualities, emotions, and receptivity. Sagittarius is an optimistic, honest, intellectual and freedom-loving sign. When the moon enters the fiery sign of Sagittarius, they work together to make things work out. The golden dawn designers called this card the Lord of Great Strength.

Nine of Wands and Kabbalah

In Kabbalah, all the nines belong to Sefirot of Yesod (Foundation). This sefirah is ruled by the moon, the orb of reflection. Nine of Wands is Yesod in Atziluth, the land of pure spirit. This card shows that success is accompanied by trouble and doubts. This card reflects strength and power.

Nine of Wands as a Person

Nine of Wands denotes someone who has been through a lot of ups and downs in life and has growing ambitions and desires. They have been through difficulties but they have also achieved goals. They are people who persevere, persist, and endure. They guard what they have achieved and they are ready to face any other challenge that might come their way before achieving their goals. They live in the moment, stay watchful, and alert. They get support from others when they need it and they keep neutral and balanced emotions before facing a new situation.

When nine of wands tarot card appears in an upright position, in a general reading, it might represent that you are facing some ongoing difficulties and challenges. You have been through some tough times and had some hurtful experiences but all your experiences, trials, and troubles have made you a stronger person. Your ambitions are growing and your spirits are high. You have an eye on the enemies and you are ready to take on any challenges before reaching your goals. This card shows that you have strength and power and you are ready to face anything.

Nine of Wands (Upright) Tarot Card in a Daily reading

If this card appears in a daily reading, it shows that your challenges, trials, and tests are not over today. There are might be many days since you are facing the challenges, you are tired and weary but today is also going to be one such day. Rest assured that you are equipped to face the challenges and you have stamina and energy. You are ready to face the day and with your ambitious spirit, you will soon achieve your goals.

Nine of Wands Tarot Card in a Love Reading (Upright)

In a love reading, this card might indicate that there is some continuing trouble in your relationship. Your partner has hurt you in many ways but there were also some good times. You are determined to make the relationship work and you have an idea that where you want things to be. You should gather your strengths and try to make it work. If you are single, this card shows that you have been through some hurtful relationships in the past but you have resilience and courage to find the partner that you are looking for. Do not give up but also be aware of the people who can hurt you in the guise of your prospective partners.

If this card appears in a career reading, it might indicate that you are tired and exhausted from the troubles that you are facing at your workplace. You are feeling drained and losing energies but the challenges are not ending. You should just give things one last push as they are near completion. You should know that your efforts in the past are bringing fruit and you’ll be healed from some bitter experiences or mistakes that you have made in the past. This card encourages you not to give up but to stay strong, tough, and resilient.

Nine of Wands Tarot Card in a Health Reading (Upright)

In a health reading, this card might indicate that you are tired and drained from constantly fighting your illness but you shouldn’t give up or lose hope. You will soon beat the illness and will be on the road to recovery.

In a reversed position, the nine of wands tarot card represents exhaustion, fatigue, and giving up. When this card is reversed, the barrier of the wands won’t be that stable. The growth will top. The man will no longer take support from the staff that he is holding. This card in a reversed position indicates that you are getting tired of constant fights, trials, and ordeals. You are giving up and are no longer motivated or ambitious to put more efforts or you are too drained and have no energies left to put more efforts to reach your goals.

In a love reading, the reversed nine of wands indicates that the relationship is failing and you are tired of putting more work into it. You are tired, drained, and exhausted and don’t want to go through the arguments and fights anymore. You don’t have strong boundaries in your relationship and incidents from the past, present, and future is putting pressure on you in a combined manner and you cannot take it anymore.

In a career reading, the reversed nine of wands represents that you are tired and drained of all the challenges and you have a burnout. You cannot take the conflicts and clashes anymore and you want to call quits. You should probably take some time out to reenergize before taking any crucial decision.

In a health reading, the reversed nine of wands show some serious health issues and lack of energy to fight the illness anymore. You need to see a medical health professional before making any health-related decision. 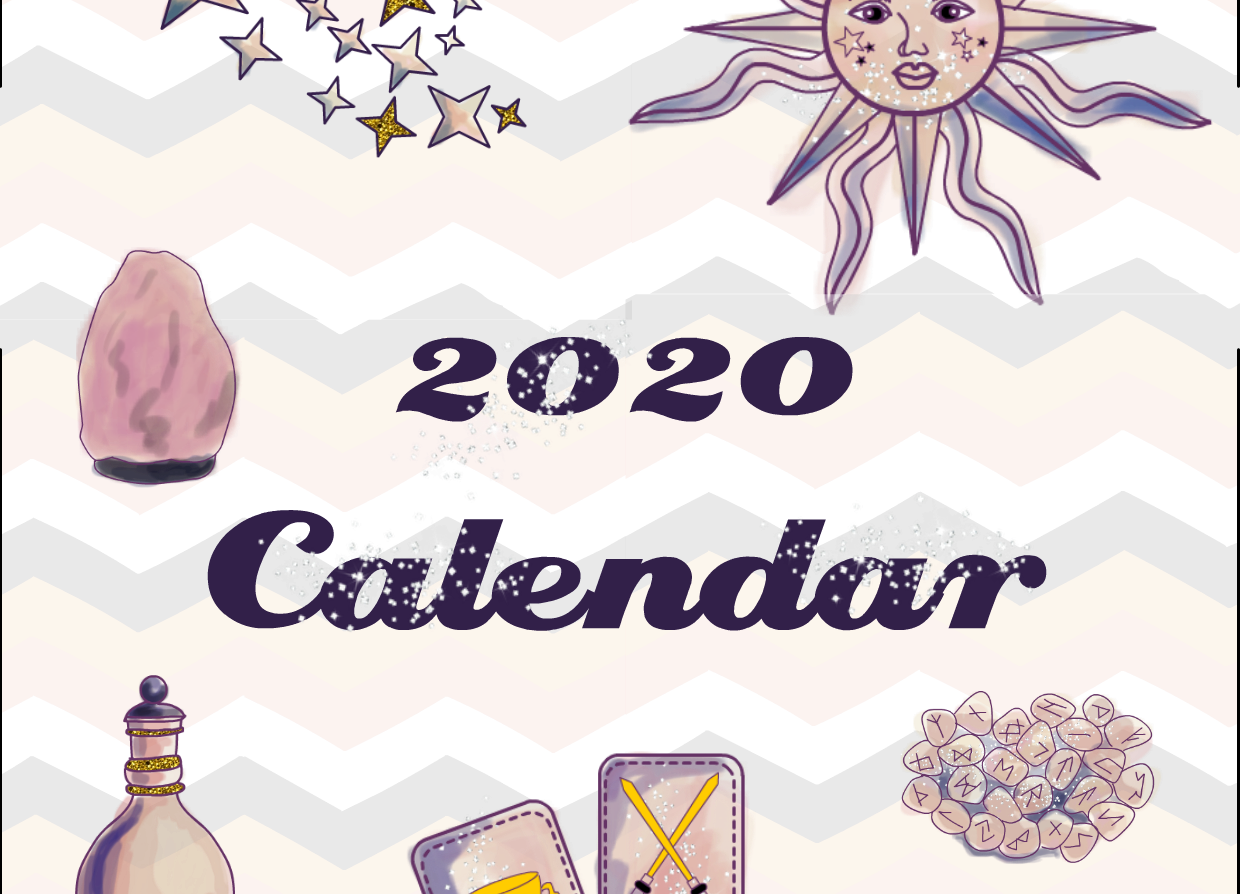 All the graphics that I have used to decorate this calendar are original and made by me. I have yet to add terms of use on this website so I am stating it here that all the calendar images are only for personal use. You are not allowed to share these in printed or digital form with someone else. You can only share a link to this post.

This is the first page of my 2020 planner calendar and it is decorated with the image of beautiful sun and stars. It has a light chevron pattern in the background. Just click on this image and a bigger image will open up that you can save.

I have decorated each page of this calendar with a beautiful and unique image like this page of February is decorated with a big cluster of quartz crystal. To save this page just click on the thumbnail and then right-click and save the bigger image.

This is a free printable planner calendar page for the month of March. Just click on the thumbnail and then right-click and save the bigger image. Print this calendar on card stock paper.

This adorable planner page is for the month of April. Just click on the thumbnail image and a bigger high-resolution file will open up that you can save or print.

This printable calendar image is for the month of June. This beautiful calendar is decorated with an image of runes.